He is specialised in civil and commercial procedures, especially those related to breach of contract, challenging corporate resolutions, directors’ liability, liability for damage, bankruptcy proceedings; and claims for amounts.

Recurrent advice for leading companies, both Spanish and foreign, mainly in the financial sector, real estate, healthcare, tourism and construction.

Frequently participates as a speaker in diverse forums related to Procedural Law and Arbitration.

Has been a member of the Bar Association of Malaga since 2002.

On concluding his degree in Law, he began his specialisation in Private Law, obtaining the Diploma of Advanced Studies in Civil Law, while collaborating with the Civil and International Private Law Department at the University of Seville.

Since 2004, he has practiced law at prestigious multinational firms such as URÍA MENÉNDEZ and GÓMEZ-ACEBO Y POMBO, also undertaking leadership of legal advice for major companies such as REALIA and the BLUEBAY Group.

In January 2019, he joined the Procedural Law and Arbitration Department at URA Urquiza Abogados as Counsel, undertaking its leadership. 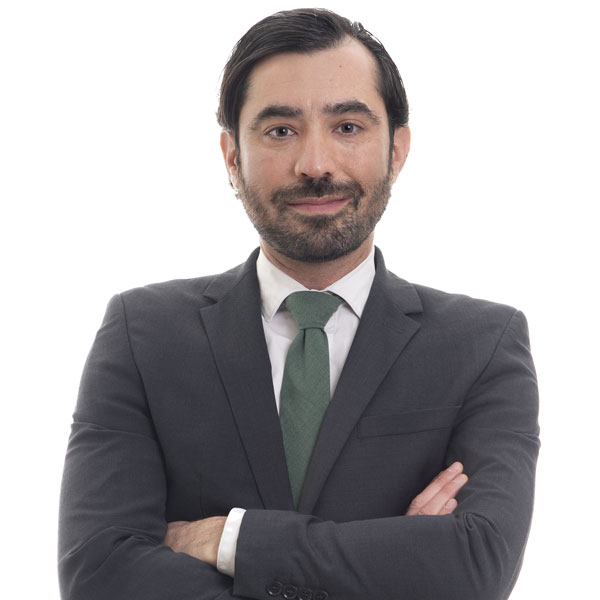 Diploma in Advanced Studies (D.A.S.) in Civil Law at the University of Seville, with an A grade (September 2003) that proves he satisfactorily completed research work (thesis “Equidad y Orden público en el arbitraje privado español”, directed by Professor Ángel López y López; presented, read and graded A) and having completed the 20 mandatory credits in the course period (October 2000 – June 2001).

Master in Strategic Studies and International Security at the University of Granada (2014-2015).